Old poems are where new poems come from.

While rummaging through folders of old poems, I found the genesis of a current poem I wrote about my mother, and her diagnosed dementia.  Most of the work that I generate about my mother is not for public consumption, with the exception of the published pieces that hopefully provide a little insight.

This ‘mother’ poem was the spawn of two poems I’d written back when it became clear that there was something wrong with her mental capacity.    Both poems work to piece together bits of what I know and imagine of my mother’s childhood. 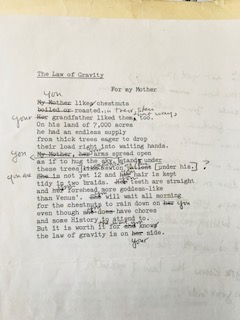 Parent One: The Law of Gravity

She was diagnosed with this affliction back in 2011.   But I suspect that there was something wrong with her way before.  I am certain she had a strain of PTSD that was neither diagnosed nor addressed while I was growing up with her.

Both of my parents had it.  How could they not?  They’d lived through a war, had their family members sent to work camps, killed or drop dead from disease.

Parent Two:  Knowing This is the End

I probably have it too.  Though I don’t dwell on it too often, it’s good to be aware of one’s fault lines and where they be.  I am not immune.

The poem these two old ones birthed has been published in the current issue, #109, of Hanging Loose Magazine:

–from You Live in the Space Behind Your Eyes

Incidentally, this issue also features two remarkable poets who I just found out about: Jose Angel Araguz and Carole Bernstein.  They are worth a read.